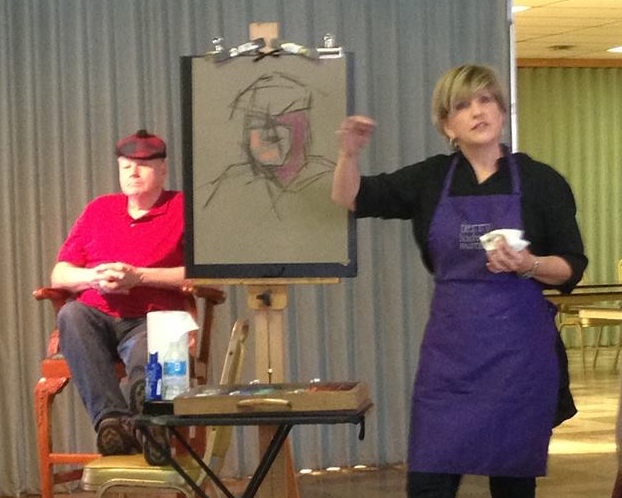 Diane Rappisi is a contemporary realist painter whose work fuses the light and chroma of the Cape Cod colorists with the form and structure of the traditional Italian and French academies. She works in oil, pastel, charcoal, and graphite.

Diane is a member of the IAPS Masters Circle and a Signature Member of the Pastel Society of America, and serves on the Board of Directors of the International Association of Pastel Societies (IAPS).  She also holds memberships in the Salmagundi Club in New York, NY, the Oil Painters of America, and the Pastel Society of Colorado.  Her work resides in numerous private and public collections across the country, and selected pieces have been published for the National Park Service in Glen Echo, MD. Diane's recent honors include "Best of Show' at the Pastel Society of Colorado's Mile High Juried International Exhibition, as well as awards from the International Association of Pastel Societies' 22nd Annual Exhibition in Albuquerque, NM, and the Pastel Society of America's 40th Annual Exhibition in New York City. She received an invitation to exhibit at The Butler Institute of Art in Youngstown, OH. She has participated in national and international group shows at  Arte et Amicitae in Amsterdam; the National Arts Club in New York;  S.R.Brennen Gallery in Santa Fe, New Mexico;  The Union League in Philadelphia, PA;  Kiley Court Gallery in Provincetown, Massachusetts;  Abend Gallery in Denver, Colorado;  Old West Museum in Cheyenne, Wyoming;  as well as exhibitions in Connecticut, Ohio, Texas and New Jersey . Her work was featured in the December 2014 issue of Pastel Journal.

Diane trained in Philadelphia, PA, in the full-time Professional Program at the innovative Studio Incamminati which was founded by renowned artist Nelson Shanks. There she deepened her understanding of color, form and anatomy, and discovered her innate love of figure painting. While Diane is originally from New Jersey, she has resided and taught in  Massachusetts, Colorado, and Texas. While living in Colorado,  she owned and operated a studio, "The Atelier at Castle Rock," where she painted regularly and offered private and group instruction.

Diane has settled down with her husband in eastern Maryland, where she now paints in her personal studio and offers workshops on location. Recent workshop venues include the 2017 International Association of Pastel Societies annual convention in Albuquerque NM, and a 10-city workshop tour through the south island of New Zealand and various locations in Australia. For information about hosting a workshop at your location, please contact Diane at [email protected].